Stand-up comedy with The River Comics 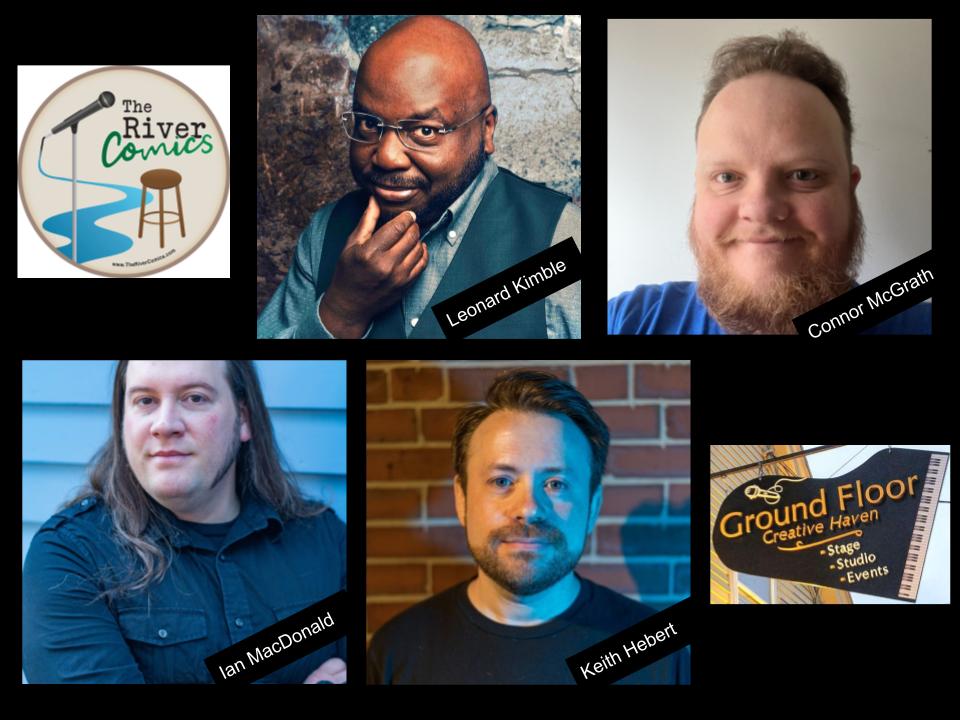 Connor McGrath Connor McGrath has performed stand-up comedy throughout North America for over a decade. Born and raised in Southern Maine, he offers an inimitable, off kilter look at life as a millennial on the autism spectrum. McGrath has opened for Mark Normand, Cameron Esposito, and Sheng Wang. He has twice been voted "Maine's Funniest Comedian" by the readers of The Portland Phoenix. He recently recorded his debut album “Kind, Bearded, Weird” at One Longfellow Square in Portland, Maine.

Keith Hebert An accountant by day and comic by night, when Keith Hebert’s not clacking away on a calculator he’s yakking it up on a mic. Keith will make you laugh so hard you'll make a mess in your pants. As a boy in Marblehead, Massachusetts, Keith Hebert often made his friends laugh so hard that for a moment they all forgot they were orphans living outside. Except for the winter months, It was an idyllic childhood. In 1993 Keith started gaining a reputation throughout Marblehead as a very funny boy. Eventually Keith got so funny that his parents decided they loved him again. Keith moved back indoors, started going to school and fell in love with accounting, but he never lost his knack for making people laugh. Keith doesn’t like to brag about his slew of comedic accomplishments or all the famous comics he’s worked with, but rest assured that Keith Hebert is certified to make you laugh and do your taxes. Keith is a member of the Portland Comedy Co-op and can be seen regularly at the Laugh Shack at Lincoln's.

Ian MacDonald Growing up in Auburn, ME, Ian MacDonald now spends his Winters, Springs, Summers, and Falls in Brunswick, ME. Ian was a contestant in The River Comics’ Maine's Wicked Funny Laugh Off Contest 2021, finalist in Maine Event Comedy's Tightest Five Competition, performed at the Bricks & Bridges Comedy Fest 2021, Portland Maine Comedy Festival 2022, third place finalist in New England's Funniest Comedian Competition 2022, and was a regular performer at Empire Comedy Club, including the Make ME Laugh game show. His Mom will tell you he's been doing comedy his entire life. Others may tell you his life is absurd. Specifically, Camus. To quote Ian, himself, from his upcoming book: “I like to hit things with sticks.” And, “I didn't know what a River Comic was, but I knew I had to be one.”

Leonard Kimble Leonard Kimble is an up and coming comedian from Auburn, ME, where he lives with his wife, two kids, and a cat he doesn't want. He spends his days as that IT guy who works on stuff you don't really care about. Originally from Chicago, Leonard bases his comedy on things he has said to his wife in the car, whether it be about their kids or life in Maine. The sound of strangers laughing at something silly that he wrote in his basement fuels him to his next gig. In 2018, Leonard's first year doing comedy, he was a semi-finalist in the Empire Summer Comedy Classic in Portland, a semi-finalist in the House of Bacon Wednesday Night Live Comedy Competition, and a semi-finalist in the Maine Event Comedy's Tightest Five Competition in Auburn. He also advanced to the second round of The Last Comix Standing at the Mohegan Sun. He really enjoys the semi-finals of competitions because of all of the free beer.

Owner of this event? Login here to update this listing.