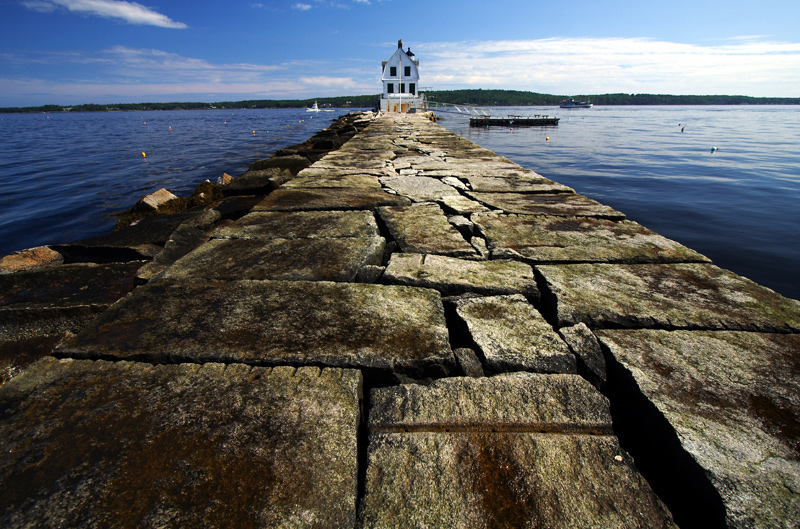 Rockland, Maine is an industrious place. Says so right on the city seal. It was once known for building ships, making lime and carving out schooner loads of marble and granite.

Things are still humming along in Rockland; but the town has expanded its scope. The city by the sea is now also known as a haven for the arts, for music and a whole lot of lobster. It’s even become a Designated National Main Street Community for its work revitalizing its historic, brick-and-stone downtown.

Things to Do in Rockland

About that lobster. Each summer, the Maine Lobster Festival introduces about 30,000 hungry people to about 20,000 pounds of fresh Maine lobster. Guess what happens? Between the chewing, there are concerts, a parade and a footrace across floating lobster crates – something you should try only if you’re willing to take a swim in the harbor.

Fans of the sea should drop anchor later in the summer for the annual Maine Boat & Home Show, held at Rockland’s waterfront. The event is aimed at fans of watercraft and coastal living. You can also consider the Audubon Society’s Project Puffin Visitor Center, which hosts exhibits about puffins and other seabirds off Maine’s coast and live video of puffins offshore.

Rockland’s Farnsworth Art Museum has long held one of Maine’s premier collections, including works of many of America’s most recognized and influential artists. It is perhaps best known for its close partnership with the Wyeth family and three generations of Wyeth illustrators and artists – N.C., Andrew and Jamie. Nearby, the Center for Maine Contemporary Art (CMCA) has moved into a striking new space that shows off the equally striking art within and without.

There’s also music as well. Each summer, Rockland swings through the North Atlantic Blues Festival, a highly regarded gathering of blues musicians and aficionados. The historic Strand Theatre, opened in 1923, offers a full slate of live concerts and cinema.

If you’re a chocolate lover, consider stopping at Bixby & Co.’s waterfront factory. There, you can watch as they create chocolate “from bean to bar.”

Things to Do in Thomaston

South of Rockland is the small town of Thomaston, once the home of Maine’s grim Maine State Prison. After being open for 178 years, the prison was closed and leveled. The Maine State Prison Showroom remains open, selling handcrafted products made by Maine inmates. Thomaston also hosts the Knox Museum, which tells of the life and times of Revolutionary War General Henry Knox. The museum is housed in Montpelier, the recreation of Knox’s lavish Federal mansion.

Downtown Thomaston is known for its antiques shops and for Thomaston Place Auction Galleries, a major antique auction house.

Things to Do at Owls Head and the St. George Peninsula

Drive south from Rockland and you’ll reach the St. George Peninsula and to the town of Owls Head. In Owls Head, you can celebrate the air, the land and the sea. The Owls Head Transportation Museum has a magnificent collection of moving objects containing everything from vintage bicycles from still-flying biplanes. Take in the serene Breakwater Vineyards, one of the state’s newest, and enjoy some Maine-made wine. Owls Head Light, sitting on a rise overlooking Rockland Harbor, was built in 1825. The keeper’s house hosts the American Lighthouse Foundation’s Interpretive Center.

Continue down the peninsula and you can visit the seaside communities of St. George, Tenants Harbor and Port Clyde.

Monhegan Boat Line in Port Clyde offers daily ferry service to the island of Monhegan, along with fun cruises to look at puffins, lighthouses and sunsets. If you want to take to the water under you own power, Port Clyde Kayaks offers guided tours and rentals of kayaks and SUPs.

Make time for a stop at Marshall Point Light, a light station where a long wooden walkway links the land to the small stone light tower.

Looking for Rockland, Maine restaurants? Consider Rustica, In Good Company, Primo, Café Miranda, Rock Harbor Brewing Co., Suzuki and these other suggestions. You can also scroll down the list of local businesses below.

You can also consider Camden, Maine restaurants, in that popular neighboring community.

Where to eat? Consider The Slipway and Thomaston Café in Thomaston, Luke’s Lobster and The Happy Clam in Tenants Harbor and the Dip Net in Port Clyde.

Where to Stay in Rockland

Where to Stay in Thomaston & St. George Peninsula

Elsewhere in the region, consider the Ocean House Hotel and the Seaside Inn in Port Clyde and the East Wind Inn in Tenants Harbor. For more suggestions, scroll down our list of regional businesses below.

Monhegan Island
This gray, granite light serves Monhegan Island, known for its art and traditional fishing communities. Located about 10 miles from the...

Two Bush Island
Built in 1897, this light marks a well-trafficked sea lane to Penobscot Bay. It was automated in 1964. Six years later, the Coast Guard...

Exploring Brunswick's Food Scene
An afternoon stopover in this Maine foodie town We started with a glass of wine at Enoteca Athena, a Greek and Italian inspired restaurant...
61
Loading...
[6 of 61]
Show More ▼
You Might Like

A Sweet Start
Performing customized wedding ceremonies for couples getting married in Maine who want a warm, personalized and heartfelt wedding. A Sweet...

The Humble Farmer
Bed & Breakfast My good friend Julian Rubenstein and I were soaking up some April sunshine in the new B&B room on back of the house, when he...

Craignair Inn and The Causeway restaurant
Escape to this magical secluded retreat, nestled on the Maine coastline with breathtaking views, dramatic tides, and a cozy vibe. Wake up to...

True Hall Vacation Rentals
The mid-coast area is a popular vacation destination as well as a legendary summer home enclave. We have many types of properties for rent;...
Loading...
Show More ▼
Events